Saw that live and was visualizing the same pencil head/body. The chin thrust was very telling, in addition to the exaggeration and implication of “conspiracy theories”, which is the default for most liars invented by the Clowns In America to prevent scrutiny into the “Kennedy Thing”. You will have your hands full, Mandy, over the next few weeks. The amount of lying going on in the media will reach record proportions as the guilty try to conceal turning elections into those of a banana republic.

Worse yet is that many “allies” in the GOP are suddenly going right along with the farce of an election and are congratulating Biden. It’s not just Mittens and his ilk. Makes me sick to my stomach.

Separating the Wheat from the tares. I had to hold my nose to vote for a couple of my states representatives the last two cycles. At the time,they were the only choice to possibly help Trump to move forward. I have now been twice bitten ! I hope they too fall into Trumps net !

Very true. In my case, living in the corrupt gangster state of illinois, the illusion of having a choice is bought into by the dumbest voters in America. As the Rinos ease toward the trough to feed off the anticipated feast brought about by the Great Reset and the subjugation of individual freedoms we should take note and be ready. My long range plan is to move to a reliably red state with enough rural population to offset the corrupt urban centers, with reliable second amendment support to be on the right side of the civil war that will follow the abolition of the electoral college. Happy Thanksgiving to all, and pass the ammunition, please!

Welcome to Iowa! 😉 Don’t choose the Quad Cities area, it’s a little too blue for my taste, but better than IL.

Thanks=grew up in Rock Island- it was always better across the river., the further you got from Davenport.

The dim primaries in Iowas was a harbinger of calamities and fraud to come in the general election – took them weeks to come up with a result – that the dems liked.

Makes me sick too. The upside is that we’re finding out who our friends are, although the ones in government appear to be few and far between.

Republicans are basically cowards. They will brownnose whoever gets in. If Trump proves he President you’ll see them rush back.

Well, the media is in the business of misleading and spreading misinformation. But they appear to be starting to panic, as you saw from the Mike Pence briefing.

Having a hired lawyer defend Dominion is telling. Of course he’s going to defend his client. FNC should have only agreed to interview a principle. Fox now creates low-info content and cheats its dwindling viewership. Untrustworthy.

Nobody represents themselves, neither the guilty nor innocent.

Perfect! Thanks, Mandy! Plus, there are multiple videos and articles of programmers and professors altering these very machines. As for evidence, it’s saved for court not press conferences. P.S. I wouldn’t bet against Sydney Powell or Jenna Ellis, ever.

I love strong willed women ! And no,I’m not a masochist or whipped down whimp. LOL. These and women like them were the only ones that braved the unknown. They raise strong confident self reliant children. God bless and make more of them

Made me think of Esther. And the wisdom, knowing what to say, and when to say it. She saved her ppl.

If it was revealed that his companies voting machines did have problems he would be sued and would lose a lot of customers.

Hey Folks , DO NOT lose faith ! There is a rainbow coming after this storm; I am still donating to the Election Defense Fund.”I will never give up ” President Trump WILL remain in office !…GREAT NEWS:…Did y’all see the acceptance ceremony at Fort Bragg? I think you will like the new “civilian approach” announcement. Take a listen to Ezra Cohen Watnik and Miller take authority from the pentagon bureaucrats. We have a new civilian lead special forces department. Heads are about to roll ! 11/22/2020 was the anniversary of JFK assassination. Shortly before he was killed,he formed the Special Forces. Take a listen to the speech JFK gave about the military industrial complex. It can be found on utube and other sites.

Keeping the faith, even when it looks bleak at times. Do you have a link to the Fort Bragg ceremony? Another date to remember, 1121/20 was the 400th anniversary of the landing at Plymouth Rock.

Quite honestly, we are in a life and death fight against the deep state, which is much deeper than anyone, including the President, even suspected. It will at best be a 20 year battle. They killed a President and got away with it in 1963 to create a war in Vietnam and make millions of dollars. Anyone who has listened to James Files’ confession would know who was involved. The current deep state are just their successors, and though less willing to get their hands dirty with wet work, are equally determined. Got to keep fighting no matter what.

The interviewer just asked one question: did this machine switch one vote?
The goober then launches into a full explanation (portrayal) and mentions largely every one of our concerns regarding the fraud that we all highly suspect has been foisted upon us. It’s obvious at least to me his answers were rehearsed. Maaaaaybe he got the questions ahead of time..??

You get the feeling by watching him he was extremely worried, almost to the point of trembling. I think the part where he says that the machine is impossible to cheat was a bridge to far, that statement feels rotten coming from him.

Thank you Mandy ! Hope all is well with you and your’s. This was a very good read; Faux News is dead to me. I do have a strange sense of humor. I enjoy a good infomercial show every once and awhile . Where a prearranged script is given to entry level actors. Keep your faith ,folks; God Bless

A person can not physically change the touch screen, it’s the SOFTWARE behind the GUI (Graphical User Interface) that can be coded to algorithm sequence to MOVE tallies from one file to another. It can be a back door programmer monitoring the tallies, then grouping those tallies by changing the file name … simple as that! If NO ONE CALLS for the recount of the hard copies. NO ONE would EVER know the software sequence was moved or renamed. When a recount of the HARD copies are done … why then are the tallies so far off? or lost… or shredded. I believe EVERY state who had Dominion systems should be challenged!

Heh, before “Mr Steal” even opened his mouth it looked like “Max Headroom” level of portrayal to me! :laughing-hand:

Deep swallows too. If Trump doesn’t triumph all this fraud will just disappear like nothing ever happened. The left will smile and happily go on to do the same in 2022. And I’m guessing Maxwell will be set free.

Total lie. I did massive amounts to research for over a week on Dominion, their software they use and some of their executives. Number one is that they donated over $500,000 (there could be more if I had the names of all their executives) to the DNC political action committee after the democrat’s convention. Don’t you think that is a conflict of interest? The last time Dominion gave donations to a Republican was in 2004. That includes the company itself as well as their CEO and President. Second, one of their VP’s, Eric Coomer bragged about stealing this election to make sure Trump wasn’t reelected… he made sure of that (from how he programmed their systems). He’s one of their equipment engineers who made a video of how to alter votes back in 2017 (see video below).

Now he bragged about this not once, twice or three times but multiple times in his tweets, conference calls, emails and videos. Including another Dominion employee in Canada through a tweet. Watch these video’s on Dominion’s activities. There is one thing most liberals in their twisted personalities, they want people to know how smart and clever they are and cannot stop bragging about their deception. It’s from their narcissistic personality disorders and/or sociopathic behavior. Dominion controls 40% of the voting machines in the United States, as well as 40% of the world. It appears on the surface that Dominion through voter fraud worldwide is picking and choosing our world leader, who just so happen to be corrupt like Joe Biden. Which means these world leaders are compromised in some way and in no way do they care about a free, fair and honest elections.

Now a few problems that have arose in a number of swings states. In Pennsylvania, local engineers were given access to these system capabilities, (which is NOT allowed) to change votes hours later. The machines also were taking blank ballots and scanning them into the machines. These machines are pretty temperamental and extremely sensitive. It kicked my ballot out the first time because I didn’t completely fill in the bubble and had to go back to fill them in completely. No white should show in the bubble. So, scanning blanks ballots shouldn’t happen, so that means the software, the machine itself or both were altered in some way.

Chanel Rion on “Dominion-izing the Vote” 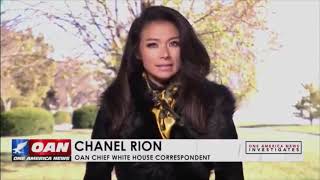 I Bought a Voting Machine Online … Then Hacked It 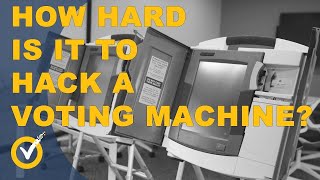 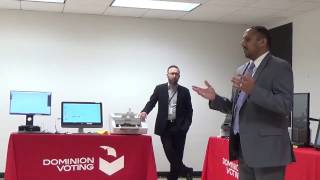 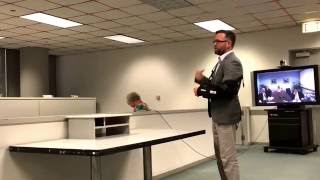 There is one more thing that I left out,Eric Coomer is a member of Antifa.

Can’t body language experts testify in some states as “experts in a respected field”? Just curious.