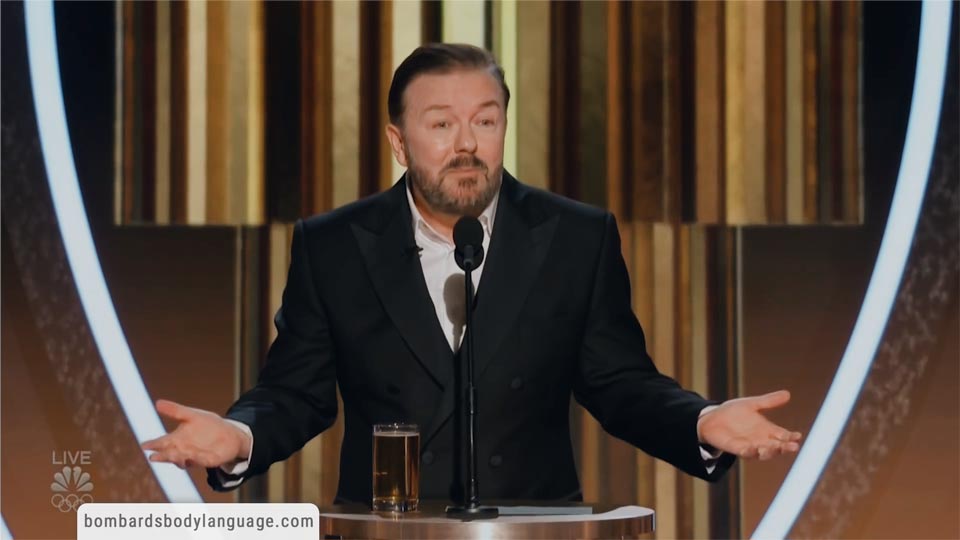 To borrow vernacular from Star Wars, there’s a shift in the Force. The hunters are becoming the hunted.

You know when someone says something that might be a throw away line but ends up being very revealing?

Well it was very interesting that you point out the guy with the tattoo and tight jaw… That is Nicole Kidman’s husband!

Fakewood’s professional fakers punked by one of their own. It ain’t no fun when the rabbits got the gun. From the clips I saw after, it did not stop several from inflicting their idiocy on the audience. Still good that public sarcasm is directed at the perverts and pedophiles in the room.

Im starting to think that the idiocy is a paid gig.

I believe you’re right. In for a penny…In for a pound !

I’ve thought for a while that if these people want to continue to work, they must do their paymaster’s bidding. They are actors after all. The TDS they act out seems to be an insurance policy against unemployment. What the heck else can those ignoramuses do to make that kind of money?

Seems to good to be true, but I hope I’m seeing an implosion that will continue.

loved it, maybe the shoe is on the other foot. Trump 2020

I loved it too. I wish I could share your Sentiment about Trump given I am a supporter of him, but I feel he has been hijacked.

Trump is the breathing space and not the saving grace… If Americans can give him a second term then your politicians can make great changes.

I hope not, I’m trying to trust that there are things we will not understand at first.

Mr No Name
Reply to  chrisvirgo26

As no-one is perfect, I don’t trust that he won’t make mistakes or that certain calculated risks won’t pay off, but I trust he’l do what he believes is best for America, and given his performance so far. He’l get it right far more often than he get’s it wrong.

As I have said, i am a Trump supporter having to debate people who just dont understand. Having said that, just agreeing with everything and every move he makes may not be ideal. If we pay attention to the reaction of the assassination of a top general who wasn’t in hiding, we should be able to question this. Not trying to get into a debate.

I hope Mandy analyses the speech Trump gave after the assassination of the general.

Why do you believe that? I am watching him like a hawk and I’ve seen no indication of it.

I think this was the award show we have all been waiting for! I stopped watching years ago because it was ridiculous how they act like they need to teach us and school us mere mortals. Even Ricky couldn’t stop them from acting like idiots! I’m thinking he woke up a lot of people that night! Amazing analysis as usual Mandy, Happy New Year to you and your family.

Great review, one of the best as a matter of fact.

Classic!! I am a bit sorry I skipped it last night!
Thank you for sharing your view Mandy.

The only honest part of the GGA. Thanks for your observations and the laughs.

Happy New Year ! Tried to make a donation to start the year out right. had some trouble with the Pay Pal account. Will have to come back later. Hope all is well and wish a better year for YA’LL. The only thing missing,was one of their Terrorist friends with a I.E.D.VEST.

Stopped using Pay Pal a few years ago and blocked them from charging my credit card again when they charged me for something I knew nothing about. You can make a donation to this site by mail to avoid Pay Pal.

Tom Hanks, there is something super off with him. I just feel the way he responds and behaves to anything that mentions the seedier side of Hollywood, he just gets so uncomfortable. He did an interview recently where he was talking to someone about sexual misconduct in Hollywood and he just looked like he was hiding something instead of being outraged. I don’t know, but I feel that Tom Hanks isn’t the nice guy that Hollywood desperately portrays him to be.

I’ve heard a lot of crazy things about him, not sure what is true. if any of it is true then i can understand why he looked like that.

I have never liked Hanks, never liked his movies and find him creepy.
There are several actors that I could never understand why people liked them…. Tom Cruise, Kevin Spacey, Robert Denero, and Leonardo DiCaprio…. All of these men have proven to be less than good human beings.

Oh, this is great. Thank you.

Great one! but still I wonder…why does he say “We’re all going to die soon, and there’s no sequel” or “It’s the last time ,who cares..” :/

Early on, we see Brad Pitt. He strikes me as having that tensions from, “I’m know someone is watching me or could be at any moment, look engaged.” Yep, Hanks was portraying the “older man not certain what’s happening up there on stage,” but yes, acting, like Mandy said.

Guy with blue handkerchief is Al Pachino. His name was just called before Mandy rewound for review, but he wasn’t paying attention, just [acting] bored. That’s why they tapped him.

The guy who didn’t like the Rowan Farrow comment was Steven Spielberg, who is said to have arranged for pedo producers to have access to children, such as by arranging large events at Neverland Ranch. Yeah, he’s pissed. Maybe not pedo himself, but an enabler. Smiling idiot next to him may be Glenn Close, if she’s had a lot of face lifting.

Wow. He went there (he went everywhere lol). Talk about making the supremacists squirm. Well well. It appears the Hollywood hypocrites who love to lecture others endlessly are terribly uncomfortable being lectured to. Gervais shredded. It’s priceless really. Thanks Mandy. PS – I think that tight-lipped idiot is Ms Fatal Attraction herself, Glenn Close LOL. Hanks was pretty tight-lipped. I get the feeling he’s closer to the inside of the inner Hollywood freaks more than we’d believe.

When humor is employed the sharpest barbs find their mark (especially since he spoke the truth!) I had no idea who this guy was until I saw his intro speech earlier today on youtube. This guy is hysterical!

I didn’t liked it, I loved it! I will share, I subscribed long ago. Thank You Mandy for the all the years of making the world a better more understandable place

The actor whose reaction seemed VERY angry was (I believe) Jonathan Pryce (he played the “high sparrow” in Game of Thrones and one of the popes in 2 popes). Anyone have any idea what that was about ? Has he been accused of any sexual crimes ?