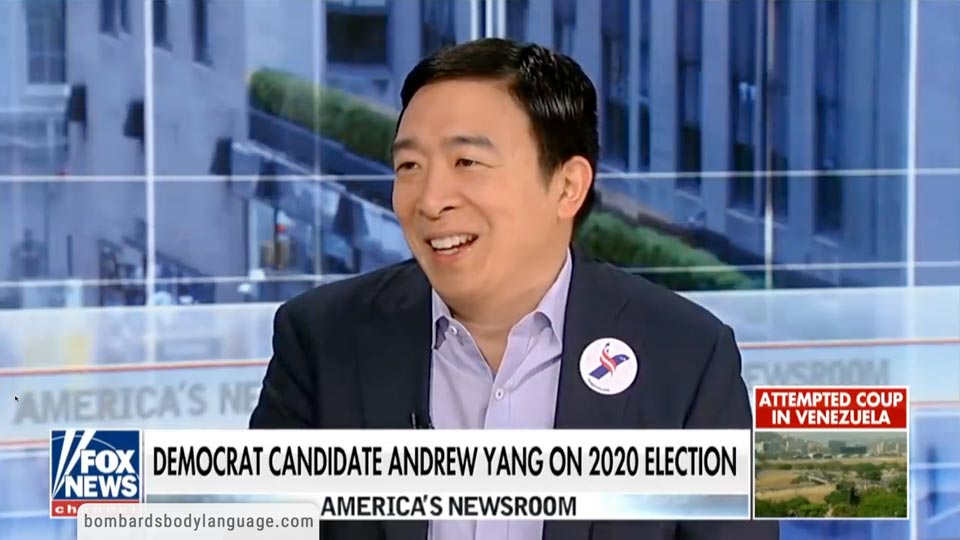 He’s too nice to be a politician. Just sayin’….

He seems grounded; bad for the competition. Wait for the smear campaign if he gains momentum.

im sure its in the works

He stands out in his field because he is one of the few who is non-manipulative, non-sociopathic and non-aggrieved and enraged, which is rare to see in a socialist who advocates redistribution of wealth. In his case, he does not demonize the wealthy and successful. Instead, he predicts that due to automation, the regular guy, who by implication, is not smart enough to adapt to a changing job market, must be maintained with a 1000.00 per month stipend, which will further bankrupt the country, or, if extracted by taxing corporations, as I suspect he intends, will drive them overseas and remove them from the tax rolls. He is a nice guy with bad ideas. Also, because he is not enraged and aggrieved, I suspect that he has little chance of securing the nomination, since the voters in his party demand those qualities and share them. Too stable to appeal to the unstable.

This is the first time I’ve heard of Andrew Yan and he’s actually a member of the House of Reps on the Dem side! Amazing! Well, maybe not so amazing. He doesn’t fit the narrative the news media is force feeding us. It sure would be refreshing if the Dems had more like him in the House (and Senate, too). Maybe then Congress could have rational debates on real issues that do concern us all and get good results for both sides.

Wow I actually kinda like this guy. Guess that’s why I never heard of him. I guess it works good if you hand pick one family to receive a thou a month. He should try it with 10 families and see what happens. I think he might need to watch his back now.

How to get a thousand dollars a month free: First, have someone give you a thousand dollars a month, then … This guy appears too smart of pose such stupidity. How did this happen? His parents raised him to become an american marxist, I presume. We’re now seeing a new generation of this stuff. He’s a nice guy raised wrong. (ie: the mayor of impoverished South Bend, IN, was raised by a marxist father.)

Wow, you called it at the end of the video with there being another “Bernie incident.” MSNBC gave Andrew Yang the least amount of speaking time in the debates and Andrew claimed his mic was cut off when he tried to interject.

Likable guy, but giving everyone basic income puts more money in the hands of the same politicians Trump is battling now. We’d be refilling the swamp before we even drained it. You can bet that the second they pass a bill like that, there will be all kinds of exceptions and reductions for the right. Like: reductions for mandatory “reparations”, reductions for anyone who is accused of “hate speech”. Mandatory political contributions (one of them has a bill that would give ($600 ? / year) that could only be given to a political campaign, or maybe only an “approved” political campaign. Every proposal the Dems have this year is all about ensuring that they always control the presidency. If you think that is overstated, read what happened in California. California used to be slightly right of center, and it went back and forth depending on the candidates. They solved that with the law that made illegals citizens at the end of the Reagan admin. They fooled Reagan, he was trying to solve immigration with a “grand bargain”. He kept his part of the deal and they never have. For the past 15 years or so, Calif has huge Dem majorities in both state houses. The governor and all state wide offices and now solidly all Dem. Both US Senators and most of our congressmen all Dems.

Even totally controlling the state, they passed a law a few years back so that parties don’t get to nominate candidates. So in 2018, I couldn’t even vote for a Rep US Senator, even knowing he would lose. You can vote for a Dem or a Dem.

California. Is their test case, and I believe the primary reason they fight so hard against any border enforcement, and really want open borders. They got tired of having to get goters to chose them, they want to chose the voters to ensure the “correct” outcome.

Agreed that this guy is better than most and the basic income is more interesting than I previously thought.

The fact that so many people are seduced by this “Ho, ho, ho, Merry Christmas everyone! Here is your fee grand, go knock yourself out!” gives me shivers down my spine.
I’ve seen it done in my home native country (Eastern Block) after the socialist communist regime fell, as reparation for the forced nationalization by the communists. It will jumpstart the economy, they said…
Well, it left a huge hole in the coffer, and at the end of the day there was nothing to show for it; prices went up as well…
Expecting people to be responsible with the money they didn’t earn proved to be rather naive.
P.S.
I apologize for bringing politics here, as I fully understand that this is not the purpose of this great website.

Unfortunately this will never happen in the UK ,the gov is slowly putting the poor in more dept the lower class will suffer and at the same time they support the wealthy .

Thank you, Mandy and Mr. No Name! I laughed during the comments about Venezuela.

-1
wpDiscuz
You are going to send email to
Move Comment