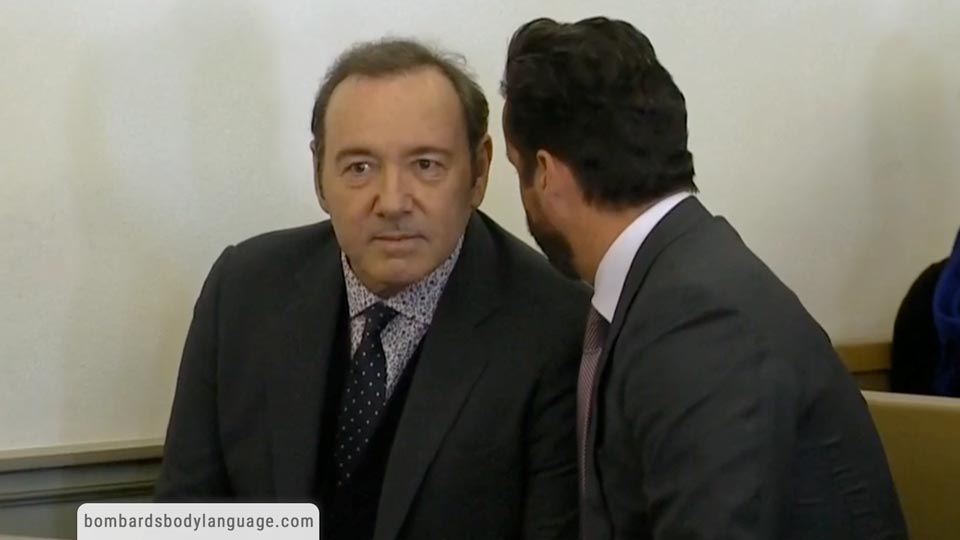 I was watching this when your notification popped up so perfect timing.

I just figured his face was showing deception because it was so controlled. No person ever holds a face like that for that long ( Don Lemon is the exception)

I also thought the stillness in his body was weird. You can see the lawyer next to him swaying and the shoulders down while Spacey looks like a statue.

I would think that a stressed person would be making movement to relax the muscles and maybe even fidget a bit more.

This creep does nothing…. too much of nothing is always something.

I never liked him. Same as Crosby and Rolf Harris… Seville too… maybe having encounters with men like this early on gave me a radar for them. Adam Sandler is another actor I can’t watch.

spot on cat…a weasle all the way

Cat, who is the lady in the pearls who stays beside Spacey’s attorney?

She is the other leagal person.
I’m not too sure how it works but do you have a lawyer and a QC?
I know in the original video she talks to the judge about whether or not she needed to be there.
In the stair case murder series you see he has two representatives.

we call them co-council…. you have to be there, in the beginning, to show you are part of the team. that way they can cover for each other.

When I watched this I thought, he is void of ANY emotion. Nothing. Vacant. Sort of like a puppet. I couldn’t put my finger on it. Watching and listening to the analysis put it all together. But so many people would see this as totally “innocent.” That’s the scary thing.

thats why we do it 😉

That’s because he is… Let the facts come out.

He also looks like he is protecting his private parts. I find this in a lot of men. Especially when they get caught for sexual indiscretion. :))

Men have to protect their private parts these days. It’s a showing of vulnerability, Winston Churchill did it, Vanna White does it. I wonder what her sexual indiscretion is? Smh.

Smh? If your question is a serious one, then all I can tell you is that back in the day it was commonly said that she was Wayne Newton’s mistress.

What? Women caught for indiscretion? Surely not! Smh.

I think he was literally going through some form of meditation techniques to keep that stillness.

Trying hard not to let the distraction get through. Even those that practice meditation for decades still use mantras.

i would have loved to have seen his lawyer’s face when “Let me be Frank” dropped. He probably spat his pinot all over the screen from shock… lol

I found this quiet disappointing to have one of your favorite actors real side come out ,my opinion is that he is guilty .What a disappointment.

Yes, Kevin Spacey is among the best actors I’ve ever seen on the screen in my life. Very disappointing, indeed. But, I wouldn’t be surprised if he was a victim of some kind of abuse growing up that left him damaged. People often have a reason for digging down deep within to so brilliantly portray characters other than who they are. If I’m right about his childhood, then I think he is going to give the best performance of his life in the coming days in playing the role of Kevin Fowler. So sad.

The Fakewood fakers like to use method acting techniques, so he was probably imagining that he was some innocent accused victim from another movie. 30 and counting accusers. Glad to see that at least a few of the survivors of the Fakewood pedophiles, perverts and predators are following through and not settling so the depravity and calous disregard of these degenerates can be fully exposed. “Resting Bitch Face” gave me the best laugh I have had all day.

I honestly believe he thinks he is going to get away with this completely, look at his face during that whole thing, the endless smirks, even the shirt he is wearing under that suit. Not to mention “Let me be Frank”.

Spot on, as per usual!
Love your take on these videos

Right on point!! I would never play poker with you..rofl 😀

Happy New Year,Mandy ! I’ve been worried about you. I went to your site a couple weeks ago and couldn’t even find vid’s that I had saved. What happened ? Do you have other sites? Glad to see you back !

What I don’t understand is why didn’t even one of the victims grab HIS jewels and confront him back? THAT to me is disturbing.

Awesome calls on the tells….you are the master.

Not sure but .. I think noticed a difference later when he sat in the other chair alone, at least a lot of blinking and ..hes eyes.
He looked sad but, if its true..perhaps that`s acting skills as well.
“Let Me Be Frank”
✌️

Do you think that by the time these people get to something this horrendous, they’ve gotten away with it, and when they’re in this situation, you’re seeing how they got away with it before?
For example, Larry Nassar, our favorite pediatrician, was on trial, and he attempted to play the judge. He wrote a letter basically saying his confession was false, which he only gave because of the pressure, to the judge. The judge read it. I wondered if that’s how he was able to manipulate all these people all these years.
The man who wanted to murder Larry might have been ashamed that he took Larry’s deception like a little idiot, and sacrificed his daughter.

I am a big conservative. i have to say, this here calls into question all your previous videos.. I say that as a full on trump supporter and agree that the democrats are shady. But, Kevin Spacey for this particular instance did nothing wrong. Suggesting he’s acting guilty in court is absurd.

I very much doubt that you are what you represent yourself to be. I read your other post.You’re trying to hard ! Conservatives are known for their common sense. Calling into question previous videos has nothing to do with one. Your extremest attitude is the hallmark of an IDIOT . I say that CONSERVATIVEly .

First I watched this as you do, however from my background I also watched as a professional camera operator, movies, commercials, and more. Spacey as a professional is trained, and of course he is acting, it is his main shill I mean skill. Probably a full blown psychopath, as many go to acting to learn how to present themselves in public as they have zero knowledge of what a real smile or emotion is.

He not one Time looked at the camera, not a glance. Rule one as an actor , never ever look into the lens unless the script calls for it. This goes to background actors also. It is a busted shot, and if your operating a camera and catch that, you call the bust. Up to the director to move on or not (might know that he can/is going to cut around it).

If you are not used to being around camera’s in your face and a real joe , you would usually at least glance at it. Especially in a courtroom Spacey knows what that camera can reveal.

So if Spacey is a psychopath he is always acting. Want to see an early psychopath sensing he needs to learn to act to become “normal” go look up Ted Cruise in college in drama class. I believe he is trying Shakespeare and Othello. It is on youtube, try not to cringe. Even now watch Cruz, acting when he is on camera for sure and a bad one at that. How Bongino could have supported him amazes me with his training.

Ted Bundy is the extreme end of psychopathy. Even then after he was caught, almost every female he “dated” that he did not kill said the same thing to the investigators:

He was such a really nice guy, I can’t believe he could do that.

Mandy great job of pointing out his acting skills and how he used them.