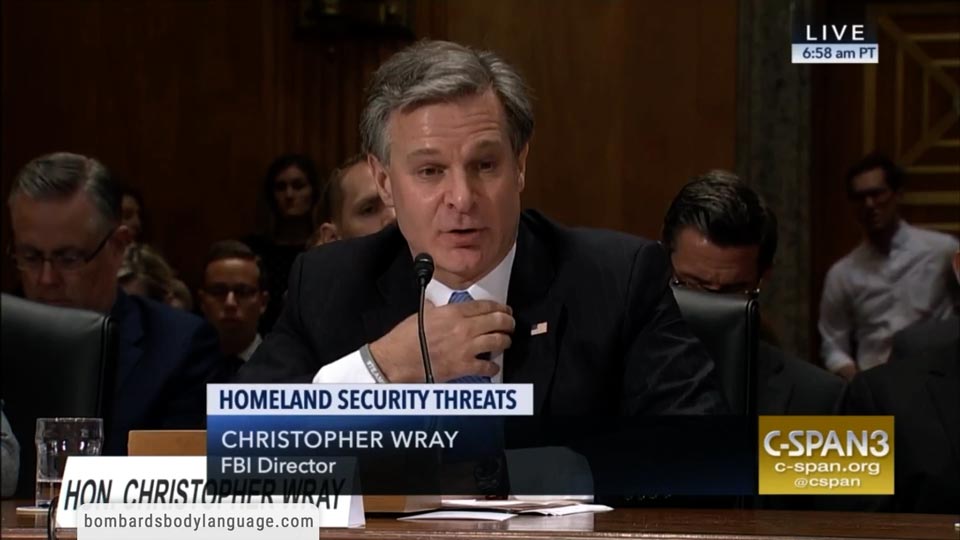 I greatly dislike the female senator…. she makes my skin crawl

I’d be cautious too if being questioned by Kamala Harris, or just about any Democratic Senator. Snakes in the grass, all of them.

Ooh, that Harris is wicked.

Mr No Name
Reply to  VickyP

She creeped me out! :demon: :really-shocked:

I’d be squirrely, too, if I had to be subjected to Harris and her insipid, party driven questions. I have to give Wray credit for controlling what came out of his mouth in answering her. I know wouldn’t be able to stop myself from verbally blasting her.

Then we have a stark contrast with Sen. Rand Paul. His serious questions are important ones for all Americans concerning the Constitution violating overreach of the secret government, which, as Sen. Paul points out, violates everyone’s rights from the U.S. President on down! Wray was guarded, in both words and movements, when answering him. I suspect Wray is a member of the NWO cabal.

The only way I see of restoring our Constitution is for patriotic American citizens to get out and vote Republican this November, in order for Trump to finally be able to get rid of the globalists currently holding far too important positions in our government. I, for one, feel compelled to hold my nose and just do it.

Absolutely right about Harris. She is an evil leftist who is trying to advance her agenda and trap people. Every time I see her, I check for horns or that pointed devil tail flicking behind her. Regarding Paul, he has an agenda as well. There are some loopholes in the FISA that have been abused in situations where citizen information is picked up when there is a foreign target. They are supposed to be masked but it has been too easy to unmask them and use their side of the information. That is what the Obama White House did that was so bad. They were making daily requests for unmasking on Trump people. If a citizen is the target they are still protected by the fourth ammendment, and a FISA warrant is required. Unfortunately the FIS Court has issued them, assuming the FBI/DOJ are not corrupt. Needs a major overhaul. Not sure about Wray. He might not be in on the Coup, but he is still a swamper. As others have said, the only way to keep the clean up going is to vote for Republicans, even like the disengenous swamp rat I have here in Illinois 6. Democrats get either house and the investigations shift from real corruption to those who are trying to get rid of it.

Here Harris derails the hearing to revisit their failed Kavanaugh attack. We need to clean House and the Senate each election cycle …be patient and then act. The Dems agreed to a ‘supplemental’ investigation. That’s what the FBI did, and they’re still butt hurt Hillary lost. Sappy and self-destructive. I agree, Wray didn’t want any part of the supplemental. I fact, Wray appears not be tuned into much …

You are right Mandy, about our constitutional rights are in the USA, not in other countries. As ambassadors or representatives of the US, to other countries, we follow the laws and act graciously when hosted. Its also a good idea to do your homework before traveling, and appreciate the nuances of other friendly countries. I can’t speak about other countries and people who are against America. Although I was in Seoul, Korea during the time the university students were bombing the US embassy and protesting us being there, I had a wonderful time. Many years later, I met one of the students in a department store working here in Arizona. We have been friends since.

As for the body language of Mr. Wray, nervousness appears in his constant chair movement, the forehead furrows, and the repeated hand movements. I would be nervous too sitting in that seat.

I can’t wait till you do Melania’s interview please

I love your work.

Sorry if I post this in the wrong section, but I would love to hear what you have to say about the Melania Trump interview. She seems so guarded, and gave out very little information during the interview, which I am sure she did out of self preservation. ABC aired it last night.

Camelface Harris is an embarrassment to the conservatives of California. And a shill for the radical leftists.

If you are getting censored be sure to post to real.video and http://www.Trumpbookusa.com they don’t censor.